Posted by Circuits-Projects Posted on 21:20:00 with No comments
There are many ways of battery charging but constant-current charging, in particular,  is a popular method for lead-acid and Ni-Cd batteries. In this circuit, the battery  is charged with a constant current that is generally  one-tenth of the  battery capacity in ampere-hours. So for a 4.5Ah battery, constant charging current would be 450 mA. 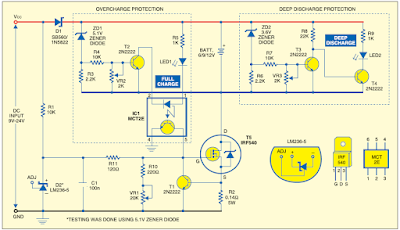 This battery charger has the following features:
D1 is a  low-forward-drop schottky diode SB560 having peak reverse voltage (PRV) of 60V at 5A or a 1N5822 diode having 40V PRV at 3A. Normally, the  minimum DC  source  volt-age  should be ‘D1 drop+Full charged  battery voltage+VDSS+ R2 drop,’ which is approximately ‘Full charged battery voltage+5V.’ For example, if we take full-charge voltage as 14V for a 12V battery, the source voltage should be 14+5=19V.

For the sake of simplicity, this constant current battery charger circuit is  divided  into  three  sections:  constant current source, overcharge protection and deep-discharge  protection  sections.
The  constant-current  source  is  built  around  MOSFET T5, transistor T1, diodes D1 and D2, resistors R1, R2,  R10 and R11, and potmeter VR1. Diode  D2 is a low-temperature-coefficient,  highly stable reference diode LM236-5.  LM336-5 can also be used with reduced  operating  temperature  range  of  0  to  +70°C. Gate-source voltage (VGS) of T5  is set by adjusting VR1 slightly above  4V.  By  setting  VGS,  charging  current  can be fixed depending on the battery capacity.  First,  decide  the  charging  current  (one-tenth  of  the  battery’s  Ah  capacity) and then calculate the nearest  standard value of R2 as follows:

R2 = 0.7/Safe fault current R2  and  T1  limit  the  charging  cur-rent if something fails or battery termi-nals get short-circuited accidentally.

In overcharge protection, zener diode ZD1 starts conducting after its breakdown voltage is reached, i.e., it conducts when the battery voltage goes beyond a prefixed high level. Adjust VR2 when the battery  is fully charged (say, 13.5V in case of a 12V  battery) so that VGS of T5  is  set to zero and hence charging current stops flowing to the battery. LED1 glows to indicate that the battery is fully charged.When LED1 glows, the internal LED of the optocoupler also glows and the internal transistor conducts. As a result, gate-source voltage  (VGS) of MOSFET T5 becomes zero and  charging stops.

LED2 will glow to indicate that the battery voltage is low. Values of zener diodes ZD1 and ZD2 will be the same for  6V,  9V and 12V batteries. For other voltages, you need to suitably change the values of ZD1 and ZD2. Charging  current  provided by this circuit is 1 mA to 1 A, and no heat-sink  is required for T5. If the  maximum charging current required is  5A, put another LM236-5 in series with diode D2, change the value of R11 to 1 kilo-ohm, replace D1 with two  SB560  devices in parallel and provide a good heat-sink for MOSFET T1. TO-220 pack-age of IRF540 can handle up to 50W.

Assemble the circuit on a general-purpose PCB and enclose in a box after setting the charging current, overcharge voltage and deep-discharge voltage. Mount potmeters VR1, VR2 and VR3 on the front panel of the box.